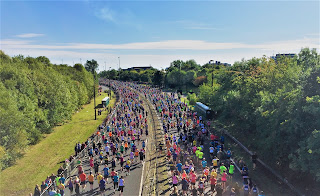 THE weekend of June 15-16 could be a very memorable one for Carlisle Mencap - but we need people of all ages to get involved!

And we are also on the lookout for athletic types who'd like to raise money for us by taking part in the Great North Run - the world's most popular half marathon - which takes place on in September in Newcastle upon Tyne.

But first things first - how do you fancy an adrenaline-rush? Well, if you've got a head for heights we'd love to hear from you because we need people to take part in our sponsored bungee jump.

In conjunction with adventure company Extreme Sensations of Penrith, plans are now well under way for the bungee event which will be part of our Summer Fun day on Sunday, June 16 at Creighton Rugby Club in Sycamore Avenue, Penrith.

It is all part of the grand finale to the charity’s 50th anniversary celebrations. The bungee jump is open to anyone aged 14 and over (people aged 16 and under must have a parent/guardian present and over 50s require a doctor’s certificate) who is in good health. It  takes place from a 145ft crane. Go on - you know you want to try it!

Also on that day at Creighton there will be stands, gift stalls, children’s entertainment, refreshments and a bar.

As a warm-up to Sunday’s event, a fundraising rock concert for Carlisle Mencap will take place at The Brickyard in Fisher Street, Carlisle, on the Saturday evening, June 15, featuring Are You Experienced? – Europe’s top Jimi Hendrix tribute band.

So all in all this is going to a weekend of thrilling experiences, if you'll pardon the pun. So spread the word. Tell your family, friends, work colleagues, the bloke sat next to you in the bus - and let them know about what we're planning and get them to join in.

Because at the end of the day, the more people take part by bungee jumping, or coming to the rock gig, or paying to see the bungee jumps, enjoying the fun day, by having a stall, by getting their company or organisation to help with sponsorship, and just by generally getting involved - the more vital funds we raise to help more than 500 adults and children with learning disabilities and their families.

We also have FIVE places up for grabs for people wanting to raise money for Carlisle Mencap through the Great North Run.

The Great North Run takes place on Sunday, September 8 in Newcastle upon Tyne and is regarded as the world's greatest half marathon. Carlisle Mencap has been allocated six places - one already taken - so if you would like to take part we'd love to hear from you. We pay your £80 entry fee/package but runners must raise a minimum of £300 in sponsorship.


So, to find out more about the Great North Run, bungee jump, the jump terms and conditions, and also how to take part - and for any queries about Carlisle Mencap and how to get involved in helping us, contact Phil at Carlisle Mencap on 01228 674393 or email phil.taylor@carlislemencap.co.uk