Getting vital messages across 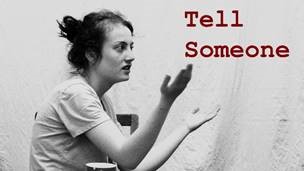 HERE at Carlisle Mencap we are gearing up for the launch of the latest film to come from our talented bunch at the Independence Studio.

The studio is based at our Grace Little Centre for children here at north Carlisle's Kingmoor Park and over recent years it has produced some excellent short films highlighting various issues, from how to vote at elections to health eating, hate crime to the history of Carlisle Mencap and how the treatment of people with learning disabilities has changed over the years - the latter in conjunction with those lovely people from Carlisle Youth Zone.

On Wednesday, February 6, at Harraby Community Theatre, we will be officially launching our latest film. Called Tell Someone, this five-minute production turns the spotlight on the dangers of mate crime.

Mate crime is when someone deliberately befriends a vulnerable person with the intention of exploiting them financially, physically or sexually - or all three.

The film has been produced with the support of the Police Commissioner Peter McCall, Cumbria Constabulary, and Haltwhistle Film Project, and features members of the Independence Studio and staff.

Also on YouTube you can see some of our other films.The dangers of sexual exploitation was featured in a film called Is It Ok?. Meanwhile last year, Take Control focused on hate crime and that film was supported by the police and the Home Office.
As well as being able to view on YouTube, copies of our films can be bought for just a few pounds from Carlisle Mencap.
Carlisle Mencap prides itself at being at the forefront of issues like hate crime and was a big reason why last year the charity was chosen to be a partner in the annual nationwide #NO2H8 Crime Awards which celebrates individuals and organisations countering hatred, intolerance and prejudice. Other high-profile partners included the Daily Mirror and Kiss FM.
*         To see the film Take Control about hate crime, go to:  https://www.youtube.com/watch?v=Q5MZj2whgnk&t=19s
For Is It OK? about sexual exploitation, go to: https://www.youtube.com/watch?v=ORqz5c1My0k&t=35s
at January 11, 2019